The proposal is built around three concepts: an emphasis and a staging of the "water" element, a duality high-tech/low-tech materialised by two distinct volumes (the tower vs the body) and an implementation ruled by a universal mathematical symbol.

This way the project is implemented according to a spiral calculated from the Fibonacci sequence; a strong symbol that links the mathematical Ancient Egypt Heritage to the Science of Nature. Above the symbol, the spiral allows for the protection of the City from the desert dryness. It shelters in its core, an oasis that spreads from its luxuriant green centre to the open side of the spiral moving progressively back to desert.

Furthermore the project is based on the opposition between the body of the spiral and the tower that punctuates the site entry. The tower is conceived as a support of the latest technologies that "look" to the outside: the city, the garden, and the desert. While the spiral is conceived as a termite mound, made out of  large blank walls that participate to the thermal comfort and focus the visitors concentration exclusively on the exhibitions.

And last but not least, the proposal stages the "water" element. Present as a feature, it also plays a role of a thermal regulator as it is in form of large volume collected and stocked in the under croft. Water is everywhere, it crosses the gardens to irrigate them and as a "breadcrumb trail" guides visitors to the City exhibitions and core.

The project integrates many biomimetic elements that are to be found in the partitions shapes and compositions as well as in the general functioning of the building. Biomimetic by essence through its multidisciplinary approach links the different sciences and this programme was the opportunity for its highlighting.

the Reptiland is having a facelift 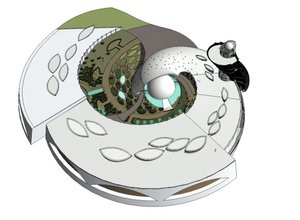 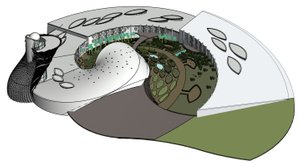